Skip to content
10 Reasons Why Does My Dog Continuously Lick His Paws
September 24, 2021 By Shamim1410

12 Ways How to Stop Dog from Licking Paws Home Remedy

How to stop dog from licking paws home remedy

Here are some of the most common causes of pain or itch in a dog’s paw, leading to him licking or chewing the affected area.

Claws that are loose or damaged create pain and may lead to paw gnawing.

Interdigital cysts, which appear as swelling between the toes of the dog’s paws, develop.

Your dog will gnaw the injured paw in the majority of these occurrences. If, on the other hand, your dog is licking both paws or significant regions of a single paw, it’s likely that it has an allergy. If your dog chews and licks its allergic (2) paws, you have a problem, and it’s most likely contact dermatitis.

How do you get a dog to quit licking his paws?

Your dog is the beating heart of your family. When you tell this sweetie of yours to quit biting and licking that itch, he simply ignores you. Telling, shouting, and bandaging are all options.

Nothing seems to work. His constant licking has gotten the best of you. Your veterinarian’s prescription hasn’t done much to help him. Everyone now refers to your poor dog as having “itchy paws.” Let’s find below 12 solutions for how to stop a dog from licking paws home remedy.

1. Prevention is better than cure

Remember the reason for the itch before you give up or try any therapeutic or calming solutions. It’s caused by the immune system of your dog being irritated by allergies.

Have you given your home a thorough inspection? Something in your home could cause an allergic reaction in your pet. Make a comprehensive investigation.

Make sure his warm, snug bedding is clean, dry, and free of wetness. Ensure that the bedding and floors he walks on are disinfected. Steam cleaning of carpets and upholstery is required on a regular basis. Sheets and bedding must be washed and dried on a regular basis throughout the house.

Allergies can strike your pet at any time. Make sure your pet isn’t allergic to common household cleaners, soaps, or dog shampoos. Allergies can be caused by inhaling or rubbing against outside pollen, mildew, insects, or an allergic reaction to pet food, among other things.

Your dog can have allergies that are almost identical to human allergies, with the same signs and symptoms. As a result, finding out should not be difficult.

If you suspect your dog’s excessive paw licking is due to a food allergy, you should consider making some dietary modifications.

Wheat, soy, eggs, beef, chicken, and fish are among the most prevalent food allergies in dogs, but they can also be allergic to a variety of other foods. An elimination diet is often used to establish which foods your dog is allergic to. This is best accomplished with the assistance of your veterinarian.

First, you’ll need to adapt to a simple diet that won’t annoy your dog anymore. Look for products that are gluten-free, soy-free, and devoid of other common allergens.

You can also speak with your veterinarian about DIY alternatives that will not aggravate your dog’s allergies. If the discomfort and paw licking are caused by a food allergy, the symptoms should subside in a few weeks.

Then, over time, gradually reintroduce other items into your dog’s diet. New ingredients should be introduced one at a time, and you should wait a few days following each addition to see if irritation returns. You’ll be able to avoid those ingredients in the future once you’ve determined what your dog is allergic to.

The mother of all allergy removers is apple cider. Its medical significance and uses are well-known. It’s a fantastic remedy for a variety of diseases. Poison ivy rashes are treated with apple cider vinegar, a natural treatment. It calms the rash and provides immediate relief.

It’s due to the presence of potassium in apple cider vinegar, which aids in the reduction of swelling and is linked to poison ivy. It’s also effective for rashes caused by bugs and fleas.

It’s a simple culinary ingredient that can solve a variety of issues.

Baking soda works like magic to restore the immune system’s PH balance, allowing the body to cope with and combat allergies. It is alkaline in nature, therefore it neutralizes acidic substances that cause a variety of health problems, such as acidity and allergic reactions.

Make a warm solution with 2 liters of water and 2-3 tablespoons of baking soda. For around 1-2 minutes, soak the paws. The itch-causing allergens will be removed, and the inflamed and irritated region will be soothed with baking soda.

This homemade solution is ideal for easing itching dog paws caused by yeast. Your pet will feel like a king in a spa with all the goodness of apple cider vinegar, natural acids from the lemon, and soothing and anti-itch characteristics from the peppermint pit.

In 2 liters of warm water, combine the juice of one whole lemon, 1 cup apple cider vinegar, and roughly 15 drops of therapeutic peppermint oil. For optimal effects, soak your dog’s paws in it for around 1 minute.

This mixture could be used as a household cleanser. Its natural acidity balance works hard on bacteria in the house, killing germs and keeping the place clean. An allergy-free home is one that is clean.

6. Keep an eye on his walking path.

Long walks with their owners are something that dogs adore. But he has no idea that wasting time on the lawn or in the park could be the source of his problems.

Change his walking path to see whether it makes a difference. Your dog’s paws may become itchy due to grass or pollen from certain trees. Chemical sprays and pesticides sprayed in your yard could be the source of the problem.

Avoid going for a walk through the woods. It’s possible that your pet has stepped in poison ivy. Also, keep an eye on your dog’s pals. Your dog could be playing and interacting with another dog in the park who has allergies from home. If your pet’s friend has itching paws as well, he could very possibly be the carrier. 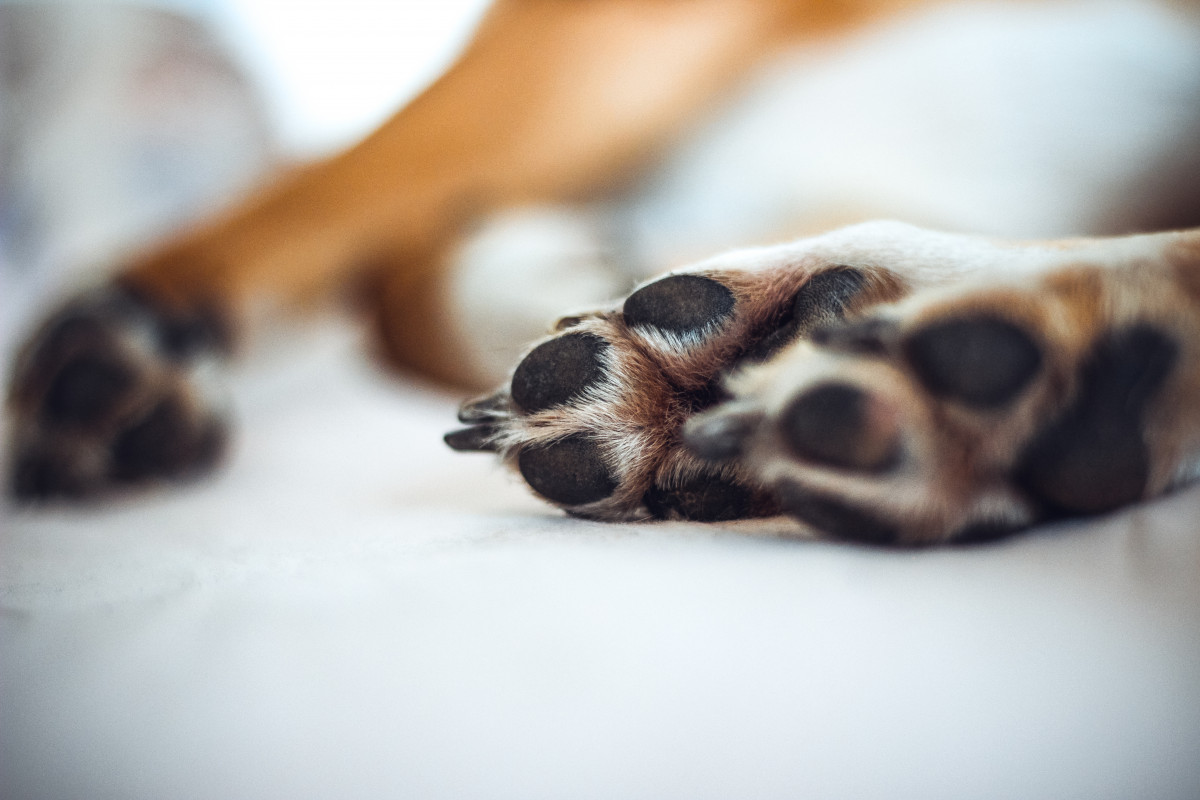 7. Coconut oil can be used.

Coconut oil promotes skin health by assisting in the maintenance of the skin’s normal moisture level. It can also help with skin problems caused by seasonal or occasional allergies.

You won’t have to worry about your dog licking it off because coconut oil is entirely safe to eat. You can either massage the coconut oil into your dog’s paws or add a small amount to his or her meal.

8. Soak in a bowl of warm oatmeal.

Oatmeal is extremely moisturizing and anti-inflammatory. Remember how, if you or a family member got chickenpox, mom would give you an oatmeal bath?

Dip your pet’s paws or sit in a cup of ground oats soaked in warm water for 10-15 minutes. The skin will be soothed by the moisturizing property, and the itch will be relieved quickly by the warm water.

9. If your dog chews his paws, regular shampooing is the best treatment.

A happy pet is one that is clean. Shampoo him with a prescription shampoo on a regular basis. Your pet is unable to communicate with you or express gratitude. However, he can demonstrate it via his actions by being active and healthy. Make sure you shampoo your pet on a regular basis.

The clinging allergens will be washed away with frequent cleaning. Warm washes also help to relieve itching and disinfect the paws. Paws that are free of filth and debris recover more quickly.

10. Use attractive dog shoes to protect your dog’s paws.

Dressing your dog in dog booties/shoes is another sensible way to keep him from licking his paws. The other dogs in the neighborhood will be envious of your dog.

Walking shoes provide a warm, snug feeling for your puppy, which is especially appealing in the fall. It provides warmth and comfort to his sensitive feet.

Not only can pet booties protect your dog’s paws from seasonal changes, but they also protect their feet from allergens. It also provides an extra layer of protection for the bandages, allowing the wounds to heal more quickly.

Your dog won’t bite or lick his paws if he wears pet booties. Online or at pet stores, a variety of shoe styles are available. Allow him to put them on before taking him for a stroll. This is the safest and most reliable way to avoid coming into contact with outside allergens that could irritate his skin.

Cuts, bruising, and foreign matter that may otherwise lodge in your dog’s fragile feet are also protected by doggie booties. Because pups’ feet are so fragile, they are extremely vulnerable.

Dilute iodine with just enough water to make it look like ice tea. Iodine is a powerful disinfectant and antifungal agent. For about a minute, soak the paws. This will alleviate your pet’s itchy paws and aid in the healing of any fungal or yeast infection between the feet and paw pads.

When your dog emerges, pat his paws dry. It should not be washed. Allow the medicine to work its magic on those paws. Because iodine is non-toxic to pets, there’s no need to be concerned about licking.

If you’re a frequent surfer, you’ll be familiar with how quickly the salty seawater heals cuts and wounds. Salt has anti-inflammatories, disinfecting, and healing qualities.

Completely dissolve a cup of common salt in 2 liters of warm water. Allow 1-2 minutes for your pet’s paws to relax in it. The healing benefits of iodine and sodium chloride kick in right away for your dog with this medication.

It also aids in the healing of bite wounds and bruising. But before you dunk your dog’s paw in any salt solution, make sure it’s clean. Make certain there isn’t any new blood. Before you dip, make sure any wounds have clotted. This remedy should not be used if your dog is licking raw paws with blood on them.

When preparing warm water solutions, use a new litter box to assist reduce his irritation and pain. It’s not a problem if you’re short on time. Simply mix up a solution of any of the above-mentioned formulations, pour it into a new spray bottle, and use it as needed. This portable dog paw disinfectant can be used anywhere.

Try these tried-and-true home cures for your dog’s allergies that cause him to gnaw his feet. Itching that doesn’t stop can become a habit.

Play with your dog and keep him involved as much as possible to stop this vicious cycle. He’ll be able to forget about his itchy paw eventually if he takes his attention off it, allowing the wound to heal.

Remember that your dog’s continuous licking and paw-biting causes underlying itching caused by allergies. Excessive moisture from licking and damage from biting can only make the problem worse.

Pathogens such as bacteria and yeast infections will eventually colonize it. Itching, biting, and otherwise disturbing the skin will aggravate the problem. Pay close attention to your pet’s demeanor and take action as soon as possible. The best solution is to reach your vet, since every dog has its different traits, body requirement, and adaptability.

8 Reasons Why Is My Dog Restless and Panting At Night

10 Reasons Why Does My Dog Continuously Lick His Paws